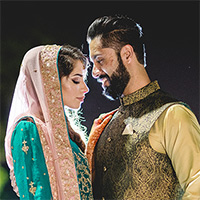 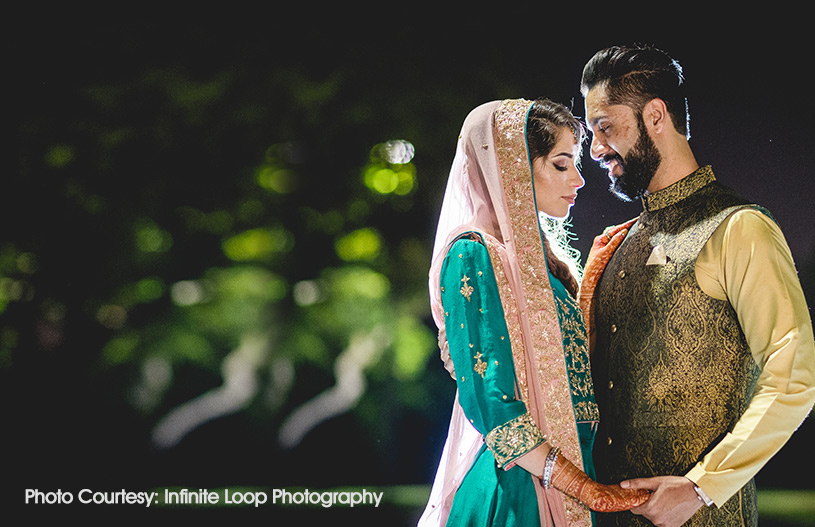 Weddings are celebrated with great fervor around the world and across cultures. What makes them special though are the diverse rituals and traditions that are truly fascinating. In Islam, marriage is seen as a righteous act, a social commitment, and an act of devotion towards significant other. Here is a glimpse into the ceremonial rituals that make the wedding an elegant and stylish affair.

The most exciting part of a fulfilling marital bliss begins with some significant rituals before the wedding day arrives. 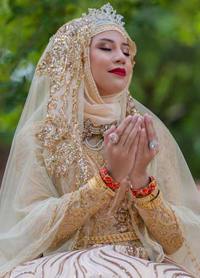 When preparing married, this prayer is performed keeping the future partner in mind to seek blessings and steer clear of doubts. It places the utmost trust in Allah’s will. An Imam performs this ritual to officially announce the wedding.

The groom’s mother visits the house of the bride and ties a silver or gold coin wrapped in silk cloth on the bride’s hand. This ritual is performed to ward off any evil and ensures the safety of the bride.

Mangni, widely known as the engagement function, is the coming together of families, relatives, and friends. They bear witness to the ring ceremony of betrothal, exchange gifts, and shower blessings on the duo.

Colloquially known as the Haldi ceremony, a blend of turmeric, sandalwood, and rose water is applied to the bride and groom in their respective homes. This is followed by a ritual bath that doesn’t allow them to leave the house before the wedding.

Henna (mehndi) designs are applied to the hands and feet of the bride. This ceremonial art is very detailed and intricate in its pattern. The darker the mehndi color, the stronger and loving the bond is said to be. Traditionally the groom’s name is hidden in the designs on the bride’s limbs for him to find on the wedding night.

The groom’s male friends and family members bring with them precious gifts, scrumptious sweets, and ornamental jewelry accompanying the beautiful bridal outfit. This is the last performing pre-wedding ritual to strengthen, support, and seal the wedding.

Grooms are often given the choice to wear either Kurta Pyjama, Sherwani, or formals like a suit, tuxedo, etc., whereas, for brides, it is Salwar Kameez or Sharara. The traditionally designed nose pin and Jhoomar are the emblems of Muslim brides. 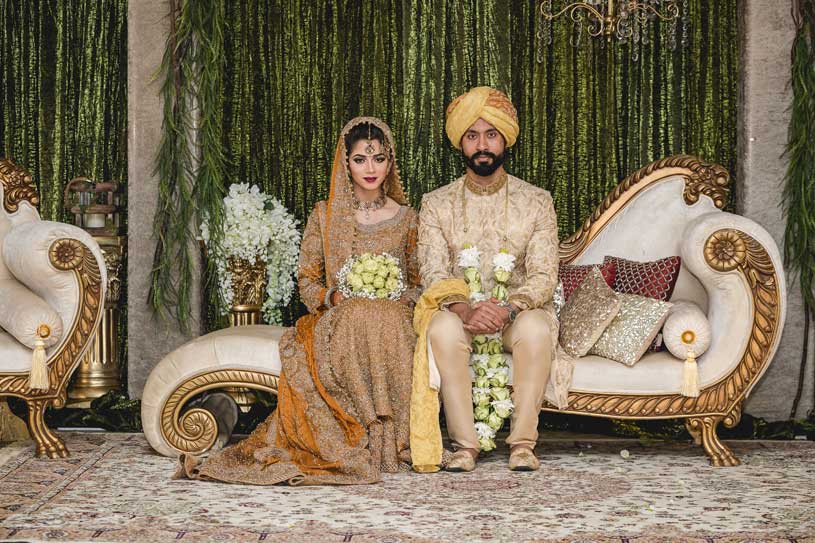 The much-awaited day is full of meaningful traditions and special moments.

The groom, ready and excited for what awaits, is accompanied by all guests, and a grand procession follows from his home to the bride’s door.

At his arrival, he receives a warm welcome. As the members escort him to the wedding venue, he is offered Sharbat (drink), while flowers and ‘ittar’ are sprayed along the way.

The Maulvi performs the ritual and recites a prayer from the Quran while the groom’s family offers the bride ‘Mehr’ to seek her consent for marriage.

During Ijab-e-Qubool, both groom and bride were asked separately their will to marry each other by saying ‘Qubool Hai,’ three times.

As decreed by the Quran, Nikah Nama is signed followed by Khutba, wherein the Maulvi recites what we know as marriage vows.

A mirror is placed between the newly-wed along with the Holy Quran. Everyone is tickled pink when the groom and bride lay eyes on each other for the first time in their reflection. 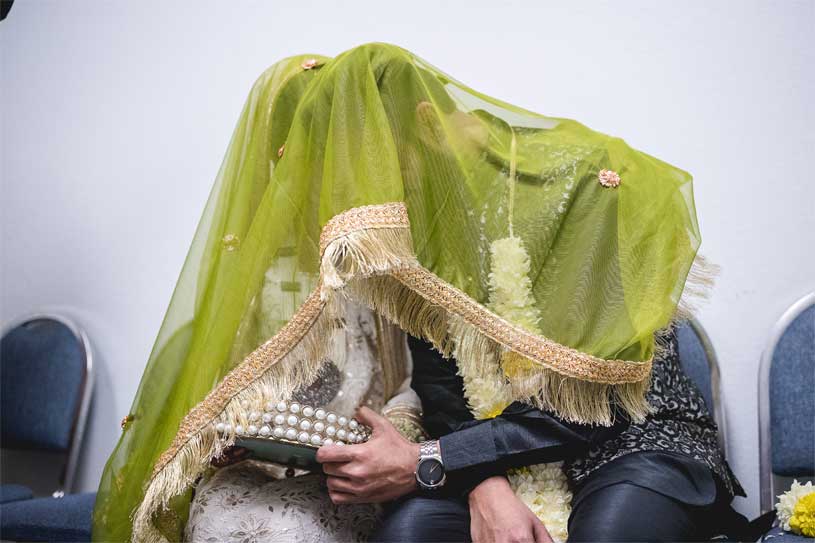 Festive rituals continue even after the wedding ceremony.

The Rukhsat is when the bride bids farewell to her family and is welcomed into her new home by the groom’s mother. The Quran is placed above the bride’s head and she begins her role as a daughter-in-law with its blessings.

Similar to the reception, the grand ceremony known as Walimah offers abundant feasts and delicacies such as Biryani, Korma and more while the bride and groom are seated atop a raised platform.

Chauthi is the fourth day after the wedding when the husband takes his wife to visit her family. There they are treated with delicacies, and this concludes full-fledged wedding celebrations. 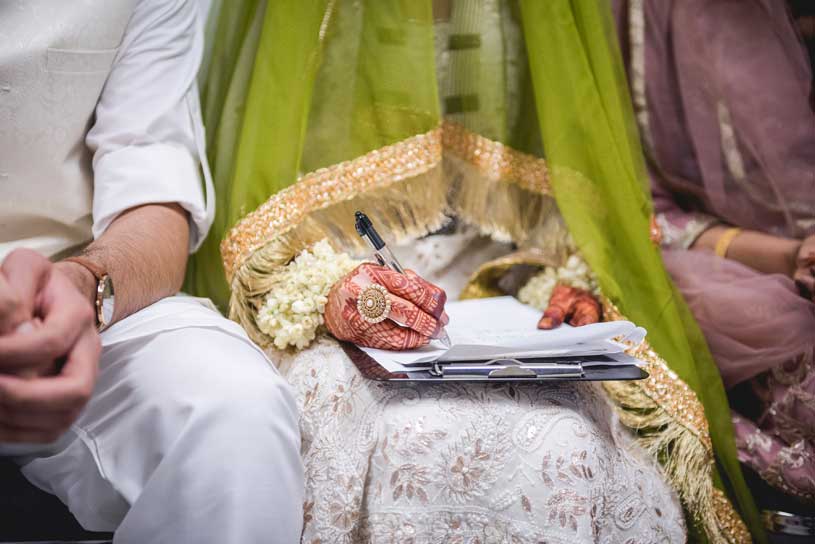 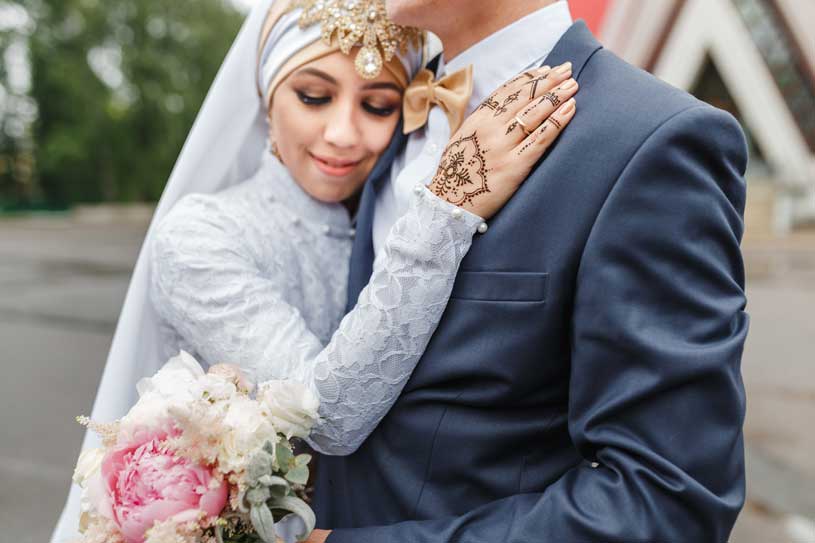