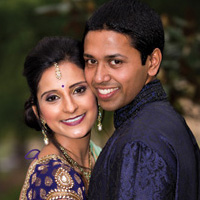 From being classmates to becoming partners in life, the journey for Avani and Sandesh was a beautiful one. It was at Johns Hopkins School of Medicine in Maryland where love first blossomed between the two. After dating for three years, Sandesh proposed to Avani on the boardwalk at Fells Point, Maryland, a quaint neighborhood frequented by the couple during medical school. Avani said yes – but little did she know that Sandesh planned a surprise party back home in Baltimore with a few close friends. When Avani opened the door, a crowd greeted her and all of them had a celebratory blast. Along with the assistance of a wedding planner, the couple began whirlwind wedding preparations immediately giving them one year to plan the event in Tampa, Florida.

Pre-wedding functions began with great pomp. The sangeet venue was decorated in the gamti-theme with chiffon fabrics adorning the ceilings and pink, orange and green uplighting. The wedding took place in the beautifully decorated grand ballroom of the Tampa Marriott Waterside Hotel. Since the bride and groom were from different cultures, the entire wedding was planned to represent and embrace traditions from both families. The families worked closely together to create a blend in the unique aspects of each culture into the wedding ceremony. The programs for the ceremony were printed on scrolls. DJ Prem entertained the guests and the ceremony came alive with songs by family and friends.

The reception hall was decorated in royal blue and gold. White flower bouquets with dashes of roses, lilies and orchids adorned the hall, making it look grand and sophisticated. Gold and blue uplighting illuminated the entire place.

A live band, with a sitar player, tabla player, guitarist among other instrumentalists, played during the cocktail hour. The bridesmaids and groomsmen entered the hall to the instrumental version of “Viva la vida” by Coldplay.

The groom’s grandfather and sister were welcomed to the song “Mahi Ve.” The bride’s grandmother, brother and sister-in-law walked in to the tunes of “Boogie Wonderland” by Earth, Wind and Fire. The groom’s parents entered to “Janma Janmada Anu bandha,” and the bride’s parents to “Om Shanti Om.” The bride and groom entered to the song “You are the Best Thing” by Ray Lamontagne. Dances were performed to “Dola-Re-Dola” from Devdas among other songs. The bride’s brother sang a surprise song, changing the words of a popular song to commemorate his sister and brother-in-law.

The cake cutting ceremony was a fun affair and took place as “Ain’t Nothing Like the Real Thing” by Tammi Terrell and Marvin Gaye played in the background. Father and daughter danced to the melodious “Age bhi Jane na Tu, Peeche bhi Jane na Tu” from the classic Waqt film. Mother and son danced to “A Song for Mama” by Boyz II Men. Speeches by parents, friends and siblings were heartfelt and endearing. Each person who spoke gave a unique perspective of the bride or groom, adding to the many fun moments of the reception.

The couple believes that weddings are not all about what the bride and groom want, but about creating a happy atmosphere for everybody including families, friends and guests. Seeing everybody have a good time is the best part of the wedding.