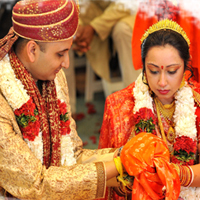 All that was common between Meena Putatunda, an Implementation Consultant in Healthcare IT and Vick Mukherjee, a Software Development Lead, was a family friend; a grandmother rather, who was no less than a god-sent messenger. She connected two families and what followed was a celebration of life.

Meena and Vick began talking on phone. Soon the conversations were longer and better. For Meena, talking to Vick was like talking to her best friend. Then after a couple of weeks, Vick visited Meena and her family over a weekend. The purpose was to sweep them all off their feet – and so he did. After making a strong impression on her parents, Vick invited Meena and her family to spend a day at his beach house in New Jersey. Meena and her family reached his beach house around midnight. Vick asked Meena to go for a walk on the beach. It was a beautiful romantic night. The moon was almost full, the breeze was calm, and there wasn’t a soul around. Words took a back seat as there was a silent communication happening between the two. The two had their Ashirbad (blessing ceremony) in October 2009. That left plenty of time to plan a wedding in May 2010 in Nashville, Tennessee, where Meena’s family lived. A wedding coordinator was hired to help make the wedding a truly special event. To ensure a perfect traditional Bengali wedding, the couple’s parents, many local aunties, and some other relatives assisted and truly put their heart and soul into wedding preparations.

The sangeet evening was organized at the Hutton Hotel. A relatively new hotel, t he Hutton, with a modern, vibrant vibe, was the perfect place for a music and dance celebration. Special mehndi artists were called on for the sangeet ceremony. Many family members and friends of the couple performed a wide variety of acts including dancing, singing, poetry reading, and even a comedy act.

The couple’s parents always dreamt of their children marrying in a temple. The obvious choice for the wedding ceremony was the Sri Ganesha Temple, one of the most beautiful temples in southeastern U.S. Sharing her favorite moments of the ceremony, Meena says, “Being carried on the open doli by my brothers and family friends was a once in a lifetime experience. Wish the time had frozen at that very moment.” Vick, riding a white horse to the temple, with friends and relatives dancing around, shared a similar feeling. The feeling was royal and majestic, he said.

The wedding reception was held at the Loews Vanderbilt Hotel. There could not have been a better venue to end the beginning of these festivities. The couple celebrated their wedding once again at another reception was held close to Vick’s home at the Birchwood Manor in Whippany, New Jersey.

After her grand wedding experience, Meena offers couples tying the knot a beautiful piece of advice: “Always keep smiling regardless of what happens! There will be lots of people and lots of cameras. And you don’t want to be caught not smiling.”