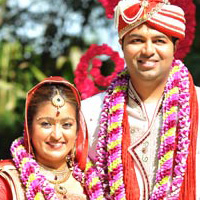 During the summer of 2012, Ekta and Vipal met through a mutual friend. Six months, hours of phones calls, and a few weekend meetings later, they knew they were meant to be together. Vipal proposed to Ekta at the Newport Levee on a dinner date. His sister Priya accompanied Ekta, and as the two women entered the hotel after spending the day shopping, they noticed signs all over the place. They followed the signs and found Vipal at the end of the path. He proposed to a completely stunned Ekta, who recovered soon enough to say yes. Ekta was in for another surprise because her sister was there too. The four had drinks to celebrate the occasion and went back to Vipal’s home where the third surprise awaited Ekta. Her mother was waiting for her with a huge smile on her face. The lovely evening culminated in a warm family dinner.

Ekta and Vipal were married on November 23, 2013. Ekta, her parents, and sister took charge of the arrangements. Her father dealt with the vendors, while her mother arranged the religious ceremonies and food. Ekta and her sister managed the rest. Fortunately, the family had eleven months to arrange everything to perfection.

The wedding took place at the Bonaventure Resort and Spa in Weston, Florida. Ekta wanted an outdoor wedding, and the picturesque venue suited the couple perfectly. The resort staff, particularly Kristin, was instrumental in assisting with the wedding arrangements.

The sangeet ceremony was held at Bonaventure the night before the wedding. Although the couple initially planned for a pool side event, they eventually settled for an indoor sangeet due to weather conditions. The theme for the sangeet was beach resort casual. The venue was decorated in beach colors such as ocean blue, yellow and silver-grey. Tables flaunted simple floral centerpieces and beach elements such as seashells, sand and starfish. A special stage illuminated with minimal lighting was arranged for the bride and groom. Live singers provided entertainment. Food was a delicious affair with three food stations and an exclusive dessert station including a s’mores bar.

The wedding ceremony, to which 350 guests were invited, was held outdoors in the rainforest area of the Bonaventure resort. The groom arrived in a Porsche accompanied by his sister, a mobile DJ, and his baraat. At the venue, an open concept mandap was created with a beautiful waterfall as its backdrop. The wedding echoed the theme from the sangeet. Starfishes adorned the aisles and lots of tropical colors such as aqua, fuchsia, deep purple and orange were used to create a tropical beach feel. Photographs of grandparents were placed on a special memory table to honor their presence. The ceremony programs, which were distributed among the guests by cousins,explained wedding rituals. Live entertainer Seema Naik performed traditional Gujarati songs for each ritual of the wedding.

The beach theme followed through to the reception. The venue was decorated in mint, ivory, coral and gold colors. The couple’s monogram was displayed on the floor, and the entire room was lit with ocean blue lighting. Centerpieces on the tables were made of shells, water, sand and tropical flowers. Guest seating cards were stuck on starfish models and placed in boxes of sand. The cake had a starfish trailing on the top along with a Cincinnati Bengal mascot for Vipal. Thank you messages from the couples were mounted on coral paper with shells attached to it. Starfish models were also used on table numbers.

The music was a mix of Hindi songs, hip-hop and R&B. The couple entered to the song “Rest of My Life” by Usher and Ludacris. The song “Just a Kiss” by Lady Antebellum was played during the cake cutting ceremony. The couple’s sisters performed dances, but the surprise moment of the night was when Vipal jumped up from his seat and danced for Ekta.

The couple advises would-be couples to sit back and relax, and let the family take over the arrangements during the week before the wedding.