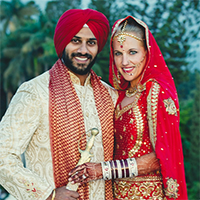 A mutual love of traveling and adventure brought Julie and Manreet together when they met through common friends in Midtown Atlanta. As true adventurous spirits, they helped each discover new passions; Reet introduced Julie to mountain biking, and Julie taught him to snowboard. During their eight years of dating, they traveled all over the world, including Reet’s Indian homeland and many countries in Europe, Africa, and Central America.

The couple’s passions help start their life’s journey together, on the day of a bike race they will never forget. After dinner not far from the race, Julie, who is a huge animal lover, noticed a lonely dog sitting on the balcony of the bar where she first met Reet. Julie rushed to find the dog’s owner, but soon realized it was none other than Reet’s dog wearing a “Marry me?” tag. When she turned around to see Reet on one knee with a ring, Julie barely managed to stop laughing long enough to say “yes”. They celebrated with champagne at home, and started the wedding planning not long after.

Reet’s family did most of the planning, and even went to India two months before the big day to finalize the details. Reet and Julie were still in the US during the planning, and his family sent them photos of venues until they decided on Pinjore Gardens in Haryana. Their guests were able sightsee before the wedding, such visit he Taj Mahal and Chambal Wildlife Sanctuary. The first event, Sangeet night, was held at a park in Chandigarh, two days before the ceremony. The ladies received mehndi outside underneath a beautiful tent. The couple chose to blend their eastern and western cultures through the music, with a fun “East VS West” dance competition. The night ended with the traditional Jaggo, when they paraded through the neighborhood streets to dance and share sweets with the neighbors.

After many hours of preparation, the ceremony was held at a gurdwara. They had the traditional baarat and milni, followed a traditional anand karaj ceremony. Julie was carried out during the dholi by her brothers and male friends on a beautiful carriage.

About an hour from the ceremony venue was the breathtaking garden, located in the foothills of the Himalayas. A horse-drawn carriage carrying the newlyweds arrived to the sound of beating drums. They entered the reception tent which was draped with purple and pink flowers to create an elegant and magical atmosphere that reflected the gorgeous natural setting. The night was full of dancing, heartfelt speeches, and of course, a beautiful cake. After cutting of the cake, the happy couple and their 400 guests were wowed by a grand fireworks display. Julie and Reet were thrilled that their adventurous destination wedding went off without a hitch, and that the celebrations reflected the happiness they felt as they continued their life journey together. 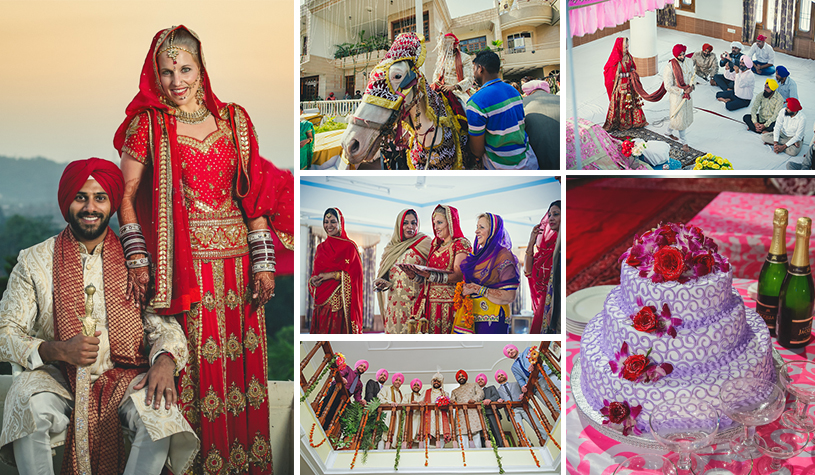