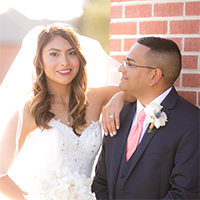 We adore each Fairy Godmother couple, but Kamal and Julissa were incredibly special to us! Julissa being a full-time teacher, and Kamal a busy businessman with two very different cultures gave Fairy Godmother a new experience in demiurgic planning.

The blending of two cultures always allows for Fairy Godmother to expand beyond anything we have ever done, and this wedding proved no different. Bringing vivid florals into a once traditionally inspired event gave the Fairy Godmother team the creative edge that they not only desired, but thrived for!