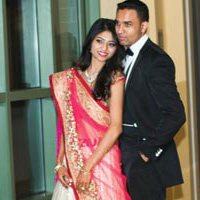 When Kruti first saw Viresh at a graduation party, she had a feeling she would marry him one day. Over two years later, the two met again, this time during Navratri celebrations. This time, Kruti and Viresh exchanged numbers, and they made it a point to talk every day. The couple began dating soon after that eventful festival and four years later, Viresh proposed.

Knowing that Kruti wanted her family present during the proposal, Viresh made arrangements accordingly. He chose Orlando City Walk as the venue,where he planned the proposal as a beautiful journey, literally punctuated with expressions of his feelings for her. As Kruti and her friends walked along the City Walk, she first saw her parents standing at a corner holding yellow flowers that symbolized the couple’s friendship. She soon realized what was happening and began to cry tears of joy. She continued the walk and found Viresh’s parents standing at the Hard Rock with pink roses that symbolized appreciation. Viresh’s mother asked Kruti to walk down to the river, and there he was, Viresh himself, walking towards her wearing a red shirt, symbolizing his love for her. He went down on his knee and proposed, surrounded by their families and friends.

After the heart-touching proposal, Kruti’s parents threw themselves into preparations for the wedding. They had about two years between the proposal and the wedding, which made planning easier. The Renaissance Resort World Golf Village in St. Augustine was chosen as the wedding venue due to its close proximity to Kruti’s house. Another advantage the resort offered were comfortable rooms where out-of-town guests stayed.

Pre-wedding celebrations were beautifully planned, and the venue for the garba event was decorated in a Moroccan theme with orange and purple as the main colors. A live band from India,and Milan Singh performed at this event. The wedding ceremony took place in the morning. Kruti arrived at the Renaissance Resort World Golf Village directly from her parents’ house, where she stayed (rather than at the resort) in deference to tradition. The wedding mandap was set up in the middle of the hall instead of against the wall. Seats for guests were placed all around the mandap allowing guests to see the wedding rituals from all sides. The ceremony was followed by lunch. The live band brought in from India performed at the wedding and entertained the guests during the entire three hour ceremony.

The reception was a grand event with the hall decorated very elegantly, courtesy of Kruti’s parents and aunt. Kruti’s brother, Viresh’s best friend, and his brother were the emcees, and they arranged dances, games and heartfelt speeches to celebrate the couple’s marriage. The DJ then took over and played some music that had the wedding party begging for more. The coupe advises prospective grooms and brides to look around and absorb everything that goes on during their wedding day so that the day can be truly memorable.