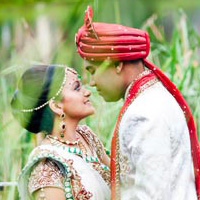 We have all heard the story about reluctant neighbors who slowly develop strong feelings for each other and end up married happily ever after, right? So goes the story of how Megha and Neil became a couple. They were first neighbors while studying at the University of Florida.

Slowly, over time, they became friends, before soon becoming inseparable. Three years after they started dating, Neil surprised Megha with a day of pampering followed by an intimate proposal at the Trump International Hotel in front of a private cabana on the beach filled with rose petals. After a two-year engagement, Megha and Neil married in a grand Gujarati wedding celebration at the Wyndham Grand Bonnet Creek located within the Disney gates in Orlando.

Wedding celebrations began on a Thursday with the Mehndi, which was held in Orlando and decorated by family. The ceremony came alive with dance performances, antakshari, and the aroma of delicious South Indian food. The Garba event was held on Friday at the Wyndham. Decorated in a ghamti (rural) theme by Suhaag Garden, the event featured jupri food stations, a rustic swing setting on the dais, and lovely idols of Radha-Krishna at the center. The highlight of the evening was a flash mob dance sequence presented by cousins and friends. The dance ended with a special performance by the couple.

The big day began bright and early in the morning, with Neil arriving mounted on a white house and accompanied by dancing family and friends. Dhol players filled the air with traditional beats. The groom and his party was welcomed by Megha’s family at the entrance of the hotel’s ballroom. Beautifully decorated by Suhaag Garden, elephant sculptures greeted guests at the entrance. The Radha-Krishna theme continued and was the inspiration for the mandap. A combination of white, yellow, red and green was used to enhance the ballroom, and the colors matched the bride’s outfit perfectly to create a traditional ambiance. Megha entered the venue seated on a beautifully decorated doli that was carried by her brothers and cousins. She looked resplendent in the traditional bridal outfit she bought in India.

Later that night, a grand reception was organized at the same venue. However, the room was transformed. From white, green and red décor, the room glowed in hues of aqua blue and grayish purple, which were also the colors of Megha’s reception dress. Mini elephant statuettes held guest table cards. Centerpieces comprised of golden elephant tusks, candle holders and glass candelabras. The stage was a simple artistic masterpiece. In the background, stood three interlocked golden frames. In front of the middle frame was a beautiful lounge chaise. Static texture lighting illuminated the stage. The entire set up presented a lovely mix of the western and Indian cultural elements.

DJ Firoz played excellent music throughout the wedding ceremony as well as the reception. The newly married couple performed their first dance to the medley o “Tu Jahan” from Salaam Namaste and “Everything” by Michael Buble. The bridesmaids, groomsmen, couple’s parents, friends and cousins even presented a hilarious performance based on the television show How I Met Your Mother.

Though Megha had many nightmares, ranging from the vendors not arriving on time to guests not arriving because of bad weather, none came true and the wedding occurred without any bad incidents.

Megha’s advice to would-be grooms is that they should always support their brides from the beginning through all the stages of wedding preparations. She also says that the brides should stand by their dreams and ensure that every arrangement is up to their satisfaction although a few compromises might be necessary.