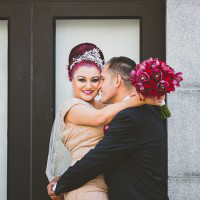 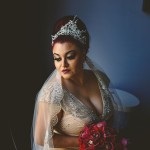 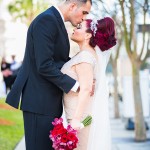 It’s not often we get to feature the wedding story of one of very own vendors! We’re thrilled to share Michele Renee Zerda’s story. The entire Desh-Videsh team congratulates Michele Renee and Osama and wishes the couple a long, joyous life together!

Being Palestinian and only here for 1 and one-half years, Osama Owias had never heard of salsa dancing when he decided to join his friends out one night. Michele Renee Zerda is Mexican American and 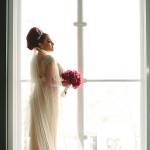 salsa dances regularly, sometimes even in her sleep. Even though the dance floor at the salsa club was packed, it was easy to notice the 6’11” Palestinian. Friends introduced Michele Renee to Osama, and they danced, and more importantly, laughed the entire night. Osama knew that same day he would marry Michele Renee, and he did so four months later.

On Tuesday, February 9, 2016, Michele Renee and Osama sent out a text to a few close friends inviting them to a Valentine’s Day party that Sunday at Le Meridien in downtown Tampa. Little did everyone know that the party was really a surprise wedding! On February 14, 2016, Osama and Michele Renee walked out together down the old courthouse steps and surprised their guests 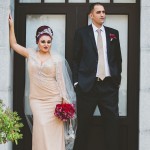 saying “Happy Valentine’s Day everyone! If you haven’t realized it by now this is really not a party, it is a WEDDING! So, let the wedding commence!” Michele Renee’s bridesmaids came out holding lighted letters with the wedding’s hashtag – #MRZWEDSAM.

Having been planned in only four days, the night was not perfect, but the wedding was definitely fun! Osama and Michele Renee looked out in the crowd at the end of the night and saw their friends, a rainbow of ethnicities and religions – they thought this is exactly what we wanted our wedding to be about – Love.