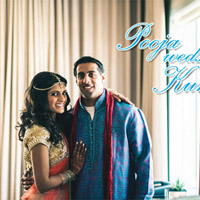 They say the heart recognizes its soul mate the moment it meets. But the moment never comes before cupid plays a little game. Pooja and Kunal’s story reflects this since they never met despite living just one block away from each other until one fateful Friday night. A mere glance at one another across the soft lights of the pub and the background music got their universe spinning into a dream love story which continues until eternity.

Romantic Proposal
Kunal and Pooja’s whirlwind romance ensued for a few months. Kunal came close to losing Pooja once, but he finally made the New Year extra special for Pooja by declaring his eternal love to her amidst flowers and ice cream.

Kunal was quite deft in building the moment of anticipation. He decided not to propose to her during their visit to Paris, and instead did so just before the housewarming puja over brunch in their newly purchased house. He managed to convince her to dress up for family pictures that evening on the grounds. The innocent Pooja’s joy knew no bounds on discovering that it was the secretly planned engagement party that Kunal had so meticulously executed to surprise her and take her to the moon.

Whirlwind of Wedding Preparations
The couple decided to plan a traditional Indian wedding complete with fanfare. The couple still remembers fondly the eleven months of wedding preparations. Though they lived in Virginia and Kunal’s family was in New York, they decided to host the wedding events at the premiere hotel, the Westin in Charlotte, NC, where Pooja grew up and her parents still resided. In their desire to enable their guests from all over the United States and India to bask in the beauty of the city, the duo happily flew back and forth from VA to NC.

Pre-Wedding Functions
Like so many Indian weddings, the pre-wedding events required meticulous planning and preparation. A week prior to wedding, the couple had a pre-wedding party in metro-Washington, DC, at the Top of the Town in Arlington. To create that fairy tale like setting, the sweeping views of the Washington Monument and DC skyline was given an extra dimension through multi-tiered candles centerpieces. Their allure was increased by the mirrored base, reflecting the colorful up lighting to give effect of millions of twinkling lights.

The Sangeet ceremony was held at the Westin Charlotte Hotel, and candle decorations, combined with Moroccan lights and umbrellas on the tables and colorful linens of pink and orange, set a festive mood. The entire place exuded an ethereal beauty after the stage was completed with a swing and colorful draping. A Ganesh statue was placed outside of the hall with colorful illumination. It was a lovely opportunity for non-Indian guests to revel in the Indian traditions such as garba, raas and bhangra dance.

For the wedding ceremony, Kunal arrived on a white horse amidst family with dhol and popular songs playing. Pooja too kept with tradition and the wedding ceremony was performed on an elegant pale pink draped fabric mandap with white backdrop and pink and white flowers. The same décor was splashed throughout the ballroom. The white and silver rued aisle was lined with clear trays of floating candles and flower petals. Hallmarks of their romance, the guests were treated to ice-cream.

The wedding reception had some western touches with a custom crystal chandelier and white dance floor with a custom emblem. Continuing with the white and the pink theme, table centerpieces varied from floral balls on top of silver candelabras to crystal lanterns and multi-layer candles. Guests were delightfully surprised when the newlywed couple hit the dance floor straight with an upbeat and peppy Bollywood number instead of a traditional slow one.

Reminiscence
The couple today happily recalls both the magical moments of their wedding as well as the typical disaster moments like the hair/makeup up artists ditching at the eleventh hour or the Indian Saris for the bridesmaids turning up short to jam the customs. However, both Kunal and Pooja state weddings have a way of working out fine and theirs did as well.