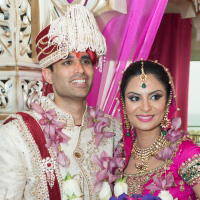 Priya and Shawn met through a mutual friend, and the first time Shawn saw her, he predicted that she was going to be his future wife. For their first date, they went to a BBQ restaurant in Chicago and after sharing an evening filled with much fun and laughter, Priya knew Shawn’s prediction would come true.

On what seemed like an ordinary day in April 2013, Shawn and Priya went shopping at the Oakbrook Mall in Chicago, but Shawn rushed her through the trip. When Priya reached home, she was in for a huge surprise. The house was littered with rose petals and candles, and soft music played in the background. Priya’s friend Shola recording the homecoming. On the bed were a dress, pair of shoes, and note that read, Tonight is our night.” Shawn took her out for dinner at a Brazilian steakhouse, and after, they went to the Field Museum of Natural History overlooking the city. There, Shawn proposed and Priya could not refuse!
The engagement took place in April 2013, and the wedding was planned for May 2014. Since Priya wanted an outdoor wedding, the couple settled on the rotating rooftop at the Hyatt Pier 66 after considering the weather and time. Anand Event Services did most of the wedding planning.

The wedding took place on the rotating rooftop overlooking Fort Lauderdale Beach. A beautiful mandap was setup on the rotating section of the room. Hot pink and apple green were the colors of choice for decorations. Heavy gold chivalry chairs with alternating hot pink and apple green padding were placed in the room. Since the room had its own charm, the decorations were purposefully understated. Priya’s dad and brother surprised the bride when the wedding ended with a shower of rose petals and a plane circling the rooftop carrying the message “Congratulations Priya and Shawn.” From there, guests moved on to cocktails on the lawn where the color theme was pink and purple.

The ceremony programs, gold colored with pink and green lettering designed by Priya’s brother, explained the meaning of Hindu wedding, how the couple met, names of the bridal party, and a thank you note for guests. Handmade ribbons were used to decorate the programs. The music at the ceremony was a mix of Bollywood and bhangra songs.

For the reception, the couple chose a winter wonderland theme as a tribute to Chicago where they met. The reception venue was decorated with white and silver with dashes of eggplant purple. Three different crystal centerpieces with purple lilies, hydrangeas and roses adorned the place. Tea light crystal candles were hanging on head tables. All tables included crystal cutlery and candleholders placed on white tablecloth. The white ballroom featured a white dance floor with a PS monogram. White drapes and purple uplighting illuminated the hall. Dinner, in the form of food stations, was arranged outdoors, near the water. The dessert area included a photo booth and two acrylic bars.

The bride and groom made a grand one of a kind entrance to fireworks following a video in which Priya was looking for a lost Shawn after the wedding ceremony. For their first dance, they swayed to John Legend’s “All of Me” with dry ice effects on the dance floor. ACE DJs played music for the reception and family members put up several performances and speeches.
Priya and Shawn urge would-be brides and grooms to enjoy the whole process of planning because everything happens so fast during this phase of life. They also recommend using a wedding planner to ease the planning process and ensure perfection at the wedding.

The Sangeet was a wonderful event with the hall decorated with rose centerpieces, crystals, white highboys, lowboys, paisley monograms, lit up bar and contemporary lighting.