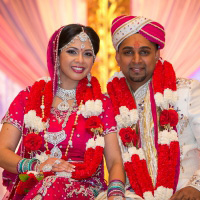 Risha Krystal Permanan and Stefen Mohammad had a chance meeting. They began dating, and then eight years later Stefen proposed – and he did it in style. On their way to his father and brother’s joint birthday party, Stefen took Risha on a short detour to an undisclosed location. Doors flung open upon their arrival, and they were welcomed by a walkway of rose petals. A stunned Risha turned back to look at Stefen, who had dropped on one knee holding the Tacori ring she longed dreamed about. She said yes and the couple took off for the party where they made the announcement.

The couple planned the wedding on their own, with a lot of help from the notes that Risha had gathered from watching weddings on television and tips from social media sites like Pinterest and Etys. Risha relied on her creativity and imagination to create a wedding that reflected both their personalities. They had to plan two weddings, a Hindu wedding in keeping with Risha’s culture and a Catholic wedding in keeping with Stefen’s culture. Being born and brought up in Trinidad and Tobago, a place known for its multicultural way of life, the couple was able to plan the dual wedding very well. The couple chose South Florida for the wedding.

The Hindu ceremony was held at the South Florida Hindu Temple in Southwest Ranches, Florida, for its divinity and sacredness. The venue could accommodate the 300 invitees comfortably. The post-ceremony dinner was hosted at the attached pavilion. The invitation included verses from the Rig Veda. Music was provided by the Florida Melody Makers headed by Pt. Neil Persad and Mala Samaroo, along with Tassa by the Boodoosingh Tassa Group, and dance was performed by Nirvana Sookdeo.

The Catholic ceremony was held the next day at the beautiful Weston Hills Country Club. The couple married in the garden, under a crystal chandelier, framed with cascading white linen. There were white rosette boxes and crystal vases filled with assorted flowers. Violinist Paulo Diaz provided music for the ceremony. During the cocktail hour that followed the Catholic ceremony, Simon and Gail Rambaran of The Island Band played music.

The reception also took place at the Weston Hills Country Club. The entrance was done in a red carpet style where guests took pictures against a backdrop of the newlywed couple’s photo. The theme was “A Love Story: 10 Years in the Making.” The venue was decorated in purple and crystal. The stage was had a crystal gate with hanging crystal globes and purple linen drapes. There was a white new India love seat set against a white linen backdrop curved on either side to create an intimate picture.

The tables at the reception were covered with floor length special linen in purple satin and silver beaded chargers. Beautiful centerpieces were made using floral wreaths designed in crystal bowls and glass sombrero vases filled with white hydrangeas and roses and lavender roses. Crystals were strung on the sides of the vases. Short pillar candles added to the décor. Rectangle tables were set along the perimeter of the dance floor for the immediate families of the couple. The centerpiece for theses tables were themed “River of Candles” and placed in clusters of 6”, 8” and 10” candles. Cylindrical vases were placed on the table along with lavender flower petals. The venue was lit up with LED lights in shades of purple. For guest, acrylic chairs with lavender satin chair pads were provided.

The couple says that nothing works better than your own imagination while planning your wedding.
Be unique and follow your heart for wedding décor and preparations.