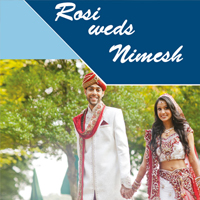 If romance is what Rosi wants most from life, she simply cannot complain. Not only did she end up with a man who loves her infinitely, but she also enjoyed a bit of romance, the kind of which fairytales are made, along the way.

Nimesh and Rosi met through common friends while at dinner one evening. One month after they began dating, Nimesh carefully orchestrated a trip to Paris for work. His approach was foolproof, and he enlisted the help of friends and a series of clever emails. On the pretext that he managed to get a ticket for Rosi as well, Nimesh and his amour were off on what would become an epic getaway. Being in Paris, it was only natural that Nimesh proposed in front of the Eiffel Tower!

Many details needed to be planned during the eight months before the wedding. Rosi and Nimesh personally looked into all aspects, delegating some details to family members. A quick visit to India served as a shopping outing for clothes and accessories. The first of the functions was the grah shanti, which was followed by the sangeet. Both events were held at a local temple. Drapes, a large idol of Radha Krishna, a photo booth and jhoola were just some of the accents at the venue. The main highlights of the evening were performances by friends and family and the wonderful time shared by everyone.

The Renaissance Atlanta Waverly Hotel made for the ideal wedding venue, and the property allowed the couple to bring what they envisioned for their special day to life. The venue was also easily accessible to both families, and offered plenty of space for the events. Predominant at the wedding ceremony were the bold colors of gold, white and red. Different types of flowers in an array of colors added to the beauty of the Grand Ballroom. The groom walked in with his twelve groomsmen, while Rosi was carried in a dholi, with her twelve bridesmaids accompanying her.

With greys and pinks painting a surreal picture at the reception, Nimesh and Rosi walked in wearing outfits that complimented the elegant decor. Beautiful overlays, centerpieces and lights completed the picture.

Rosi advises that leaving things for the last minute never helps. She is clever to add that you can never forget to smile, given that the camera is always following you. Nimesh, on the other hand suggests that you keep a buffer when allocating time for planning. He also strongly recommends a massage for the bride before and after the wedding.