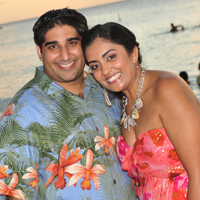 Friends since high school, Amit and Reema planned for a two week vacation in Peru to celebrate their 10-year dating anniversary. A day before the flight was scheduled, Amit asked Reema to meet him. This get-together was organized in Bridgewater by Amit’s mother, and the last minute call bothered Reema quite a bit as she wasn’t yet done with her packing.

Amit picked her up and drove to Bridgewater. On the way, he got a call that the meeting was re-scheduled. As the duo passed by their favorite ice cream jaunt, Reema requested they stop as she wanted a scoop of chocolate. She was enjoying ice cream when Amit apologized for the day and began reading a note, which was meant for their anniversary. It turned out to be a “proposal.” With a ring in his hands, Amit went down on one knee and said, “I knew the way to make you say YES was by feeding you your favorite sundae.” Reema blushed.

The destination wedding took place in Aruba. Reema choose red and turquoise as the wedding colors. White tents and the mandap were adorned with red and turquoise draping. Amita Patel from Vulcal Boutique designed an exclusive lengha for the bride. Special anarkalis were designed for the flower girls.
.

On the eve of the special day, a beach fun party offered the perfect ambience for the guests to relax and mingle with each other. Ashok Hirdaramani, an Indian guitarist from Aruba, set the mood for the evening with a perfect mix of Indian, Caribbean and American music.

Décor for the wedding was done by Fernando. White lounge sofas were adorned with beautiful cushions, back-lit fabric columns, tikki torches, pyramids with copper balls at the entrance and striking lanterns on the cocktail tables, along with hookahs, made the event all the more enjoyable. CEREMONY
Wedding ceremony was held on the beach. Two white tents with fabric drapings were arranged for guests along with white wooden folding chairs. The mandap was a bamboo structure covered in white drapings.

The ceremony was a blend of Gujarati and Sindhi traditions. The bride was escorted down the aisle by her maternal uncles, while the groom and the bharat arrived on a boat. The pheras were held in line with all Hindu traditions. Sindhi traditions, including the salt signifying the blending of the bride into the family, were also observed religiously. The couple left the site on a boat.

RECEPTION
Rare flowers from Aruba that adorned the venue stole the show. A modern and classy centerpiece by Fernando added to the glitzy décor. Another special feature was the lighting. From under tables, columns, and canopy beds to cocktail tables, the dance floor, tikki torches and string lights, the venue was quite elegantly illuminated.

The regal dulce de leche wedding cake had a magenta ribbon to match the magenta and aqua theme. Mojitos, a Latin American drink made with rum, fresh lime and mint leaves, was the special drink of the evening. The DJ played Steelpan and Caribbean music. Loud and invigorating bhangra numbers got guests rocking on the dance floor. Guests in particular enjoyed the reggaetone, which was played through to the end of the evening.