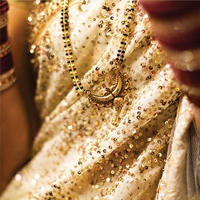 The Mangalsutra: A Sacred Symbol of Marital Union The word ‘mangalsutra‘ comprises of two Sanskrit words, Mangal and Sutra. Mangal means sacred or auspicious, while Sutra means cord. Thus, mangalsutra is a sacred thread that is tied around a woman’s neck during the wedding ceremony by her amidst holy chants, thereby giving her the status of his wife and mate for life. The black beads and the pendant are strung ontoa gold chainor a yellow thread prepared with turmeric. For the rest of her married life, the wife wears this mangalsutraas a gesture of understanding, mutual love, goodwill, and faithful commitment to her husband.

Symbolic Meaning
The mangalsutra is known by different names in diverse parts of the country – pustelu, mangalsutram thaali, thaaly, and maangalyam are some common appellations used in southern states while it is famously recognized as mangalsutra in northern India. The black beads in the mangalsutra are believed to ward off negativity in marital life and are also believed to bestow a long and healthy life to husbands. Mangalsutra is much more than a piece of gold jewelry –it is a sacred necklace of marital happiness, love and trust that a married woman adorns with pride as a symbol of wedlock.

Designs
Mangalsutras are made in various designs according to different tradtions. Hindus typically wear the ‘Lakshmithaali’ design, while Tamils wear the Kumbhathaali mangalsutra (typically by the Kshatriya caste). Elathaali and Ramar/Pottuthaali are other designs. The groom’s family according to prevalent customs chooses the design. Maharashtrians don a pendant in gold of one or two vatis. Marwaris and Gujaratis often use a diamond pendant, while Assamese, Oriyas or Bengalis do not have the custom of wearing a mangalsutra.

While designs depends largely on customs and traditions followed by groom’s family, necklaces are usually made the same way. An interlaced thread is created by taking seven strings from the bride’s wedding saree, and this sutra is then colored yellow with turmeric. The black beads and the pendant are strung into a manglasutra made with yellow thread/gold chain. The black color beads signify protection of life of the groom from the evil eye. This sacred necklace is tied around the bride’s neck amid the entrancing of holy hymns with three knots.

Is it Fashionable?
Mangalsutras have modified with changing times and the varying roles women play. Many no longer wear the necklace with their trendy business suits. Still, the significance of wearing the mangalsutra has not diminished. What has changed is the design of the necklace. There is a dramatic shift in how mangalsutras have modified- from heavy elaborate gold pendant ones to short, single stringed ones with small diamond pendants. However, the black color beads remain unchanged in conventional or contemporary mangasutras, the reason behind it being a belief that it wards off evil and upholds the sanctity of marriage.