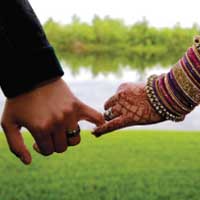 After bumping into each other several times (their parents lived in the same city), Hardik finally asked Prachi out on a date, marking the beginning of a lovely relationship. Hardik, an entrepreneur, worked in Atlanta, while Prachi pursued a career in Virginia. On a June weekend, when they were both planning to be in Florida, Hardik arrived one day earlier than scheduled. He surprised Prachi with a proposal at the airport on the day she landed. The beautiful proposal was complete with a huge bouquet, a romantic speech, and of course, a ring. Hardik went down on one knee to profess his love, and Prachi said yes.

The couple chose the Orlando Airport Marriot as the wedding venue since it was convenient for both the families and for guests flying in from out of town. To help plan the wedding, the couple hired a day-of wedding planner as well as a hotel wedding coordinator.

The sangeet and raasgarba exuded a traditional Gujarati feel. A Radha-Krishna statue surrounded by large lotus flowers created the centerpiece on the dance floor. Food stations were set up in the corners of the ballroom. Bright pink, purple, green, blue and red colors were chosen for the décor. Pink uplighting added a traditional touch to the venue. A live band played traditional raas-garba music adding to the ambiance.

For the wedding ceremony, the Grand Ballroom of the hotel was decorated in a Jodha-Akhbar theme. Red, green gold and yellow created a traditional look and white flowers added elegance. Chair covers were embellished with gold sashes. Elephant statues decorated with flowers adorned the aisle entrance. The pedestals flanking the aisle were decorated with roses, hydrangeas, orchids and lilies. A flower Ganesh was suspended at the center of the dais.

Prachi entered the venue to the tunes of “Teri Ore” from Singh is King. Music for the wedding and reception was provided by DJ Jaz of GTB productions. Yogi Patel, from WaWa Curry catered the wedding lunch.

The reception hall was transformed with modern and sophisticated decor. Eggplant purple, white and gold decorated the hall. In keeping with the theme, white flowers with purple sashes were used. Forty tables were arranged in the hall and decorated with several different designs of centerpieces. Twenty tall centerpieces, set in beautiful tall vases, included hydrangeas, roses, orchids, lilies, curly willows, and tea light candles. Another set of centerpieces was placed in assorted sized vases filled with white carnation pomander balls. White rose petals and tea-light candles were used around the vases. The third set included as small square and round vases full of calla lilies and white roses. Purple sashes, table linens, and uplighting beautifully contrasted with the whites flowers used in centerpieces.

The stage was decorated with a white background embellished with large circular flower arrangements of carnations and white orchids suspended and attached by shimmering fabric to floating flower laden ledges. Light projected as falling diamonds beautified the backdrop further.

The DJ played the couple’s favorite Indian music throughout the reception. The couple danced to the title track of Hum Tum. Prachi’s family acted out a 20-minute skit, and Hardik’s sisters presented dances.

Though the couple experienced one last-minute disaster (forgotten table cards), the wedding planner quickly took care of the matter and the crisis was averted!
The couple advises would-be couples to enjoy the moment, support each other, and appreciate their parents for their hard work.