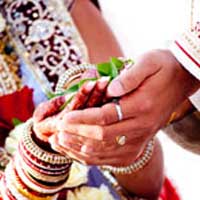 The Internet can be a beautiful thing. Particularly when it comes to bringing people, such as Bijal and Tarish, together. The couple married on April 7, 2012, at the Palm Beach Convention Center in Florida.

Bijal and Tarish first met through Shaadi.com, a prominent online matrimonial site. They met in person on February 18, 2011,in Palm Beach Amidst India Fest celebrations, and after this, there was no looking back. The couple began dating and traveling often to Michigan and Florida to visit each other. It finally dawned on Bijal that it was time to deepen her relationship with Tarish, so she moved to Gainesville, Florida, to be closer to him. Tarish helped Bijal drive to her new home in Gainesville, Florida, and soon after on May 24, 2011, Tarish proposed. The proposal was rather unexpected, though Tarish did propose in the most adorable fashion over breakfast in front of his mother and sister. He did not have a ring and was certainly not dressed for the occasion. He spontaneously blurted out his intention to get married to Bijal, after which he was quick on deciding the type of ceremony function and some close friends he would like to see at the wedding. Although at first it rather difficult for Bijal to absorb the idea of a wedding so spontaneously proposed by Tarish, she eventually that she was ready to share her life with Tarish and tie the knot.

mehndi, Sangeet, and the main weddingDeciding on the wedding venue was not all that difficult, since the couple wanted West Palm Beach, the place where they first met, to be the setting. They decided to hire Virtues Events to take care of every detail required to organize their dream wedding.
Their events included mehndi, Sangeet, and the main wedding, followed by a reception. On April 5, 2012, the mehndi was organized at the Downtown Hyatt Palace of Palm Beach. The guests were welcomed with bags that included a wedding program, directions to the venue, and some snacks and bottles of water. The mehndi venue was well decorated with flowers and candles appropriately placed to enable dance sessions and other fun-filled moments. The sangeet and mehndi was the official start of the wedding function and signaled the fun to in a venue aptly decorated in bright colors. The mehndi artist sat on the center stage, catering to the requirements of each and every female guest at the venue for all their mehndi needs. The Bandhini theme was selected for the Sangeet function, wherein the guests danced freely to lift the occasion with perfection.

The wedding ceremony was followed by an exotic reception, which was held at the same venue. The guests were eagerly crowding the dance floor to rejoice the occasion with perfection. The immediate families, bridal party, and couple also danced their way to the floor, to tunes rendered by the DJ Ace. The dinner buffet was authentic Punjabi cuisine, also catered by Taste of India. With speeches made by the bridesmaid and the groomsmen, the reception party ended on a celebratory note with thank you speeches made by the bride and the groom.

Bijal attributes the success of all her wedding events to her vendors, namely, Virtues Events, Taste of India, Ace DJ, and Divesh Photography. Even today, Bijal cherishes every moment of the ceremony, be it her photographer Nidhi assisting her in wearing the bridal outfit or eating six ras malai all on her own without sharing with anyone – not even Tarish! Such are the memories of weddings!