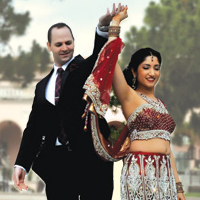 They say that when love must strike, it will go to any lengths to bring two souls together. Little did Shilpa and Patrick imagine that they would find love in India, when both actually live in the United States! It was meant to be, however, so after remaining in touch, a wonderful relationship bloomed and the couple ended up in Washington D.C together.

Valentine’s Day was the perfect day for a proposal. After a special lunch, Patrick feigned a headache and went back to Shilpa’s apartment. When she got there, she was welcomed with flowers, balloons, candles, and pictures of the couple. Shocked beyond words, Shilpa continued to believe the surprise was part of a Valentine’s Day treat until she saw Patrick on one knee with a ring in hand. Then, elation and emotion got the best of her, and the build up to the wedding began.

It was a long engagement for Shilpa and Patrick, since Shilpa had one year before she could take the Bar exam, and she was keen to get through before the wedding. After being engaged for close to one and a half years, planning for the dream wedding began.

Shilpa always wanted to get married in Florida, her home state. The couple wisely opted for indoor venues for the wedding ceremonies since the Florida heat would have gotten the better of them. The Ritz Carlton Sarasota was the ideal for the Hindu ceremony, while their Member’s Beach Club lent the perfect ambience for the beach reception following the Catholic wedding.

The mehndi was the first of the elaborate events. Held at her parent’s Orlando home, everyone was welcomed to an ethnic Indian village setting, complete with drapes and thatched roofs. There were tiny food stalls, a little tent for bhangra lessons and an area that allowed plenty of dancing.

The Catholic wedding was conducted at an old, Spanish style church. The decor was minimal, using only flowers to connect it to the beach theme. The same yellow and fuchsia theme was also followed at the Hindu wedding, albeit with different flowers. A beautiful mandap was decorated with crystals.

Given that this was an inter-faith wedding, there was a very well-planned program designed, and ushers handed out the Catholic programs to the guests, while the Hindu ones were placed on the chairs.

At the Catholic wedding, a pianist and violinist played during the entrance. To incorporate Patrick’s Irish lineage, a bagpipe began the procession down the aisle. At the Hindu ceremony, a DJ played a mix of Bollywood and Shehnai music.

The beach reception was laid back and easy, with white linen and crystal highlights. At the formal Hindu reception, there were shimmery pearls, ivory and mahogany, combined with accents of fuchsia, green and yellow. The reception was unique, with a birdbath replacing the conventional table, and lanterns and chandeliers hanging from trees. A live band, DJ and dhol player kept everyone dancing across the receptions.

The only glitch seemed to come by way of the weather, which was hotter than imagined. Otherwise, it’s only happy memories and happy times ahead for the couple.