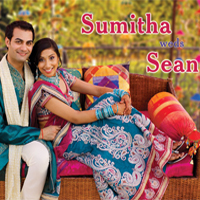 Sumitha Solai and Sean Pitroda had one thing in common – spontaneity. And so, it was fitting that Sean proposed spontaneously. Sitting in the room of Sofitel Hotel during a vacation to their favorite place in the world, Manhattan, New York, Sean pulled out the ring while Sumitha was busy animatedly narrating a story. He did not plan the occasion because he knew she would read his mind. He also avoided clichéd lines and did not go down in his knees. He simply produced the ring and felt like the happiest man on planet earth when she said yes through happiness and tears.

The wedding was planned for May 24, 2013, ten months from the engagement. The planning began in August 2012. Although Sumitha was at the forefront of preparations, Sean was a huge support. The process was tougher than they imagined, more so because Sumitha, being the perfectionist she is, wanted everything to be just so for their special day. The couple hired a “day of” coordinator, Brittany Ellis from Eventrics, to organize all details on the wedding day. As their wedding got closer, the couple allocated 25 hours per week for wedding preparations

Wedding preparations became difficult when the couple shifted the wedding venue from their hometown of Chicago to Winder mere, Florida because the place was more conducive to executing their dream wedding. As an added bonus, Sumitha’s family owns a home in Florida. Also, the couple loved the Ritz Carlton there, the place where the wedding was ultimately held.

Pre-wedding celebrations began on May 23. The Sangeet ceremony was held pool side at Sumitha’s family home in Windermere, and the theme exuded Bollywood. The venue was done in bright pink and teal with white tables decorated with lanterns and canopy beds highlighted with Rajasthani umbrellas placed along the pool perimeter. The pool itself was adorned with lit lotus flowers floating in water. The entry was lined with lit palm trees. The back terrace was decorated with 200 market lights placed under mini Rajasthani umbrellas. The bride and groom were positioned under a canopy on silk sofas accentuated with colorful pillows. Food stations were placed under draped arches and marked by wood signs. Desserts were served in a separate lounge and a gazebo served as a bar.

The wedding took place by the lake at the Ritz Carlton in a gazebo. The venue was done in traditional orange and red colors. The bride was dressed in a red saree, and the bridesmaid donned yellow saris. Red and orange fabrics were used to drape the mandap. The groom arrived on a horse and the bride arrived in a horse-drawn carriage while traditional Tamil songs played in the background. After the ceremony, the couple left in the carriage.

The ceremony programs, done in gold, were embossed with the couple’s custom monogram designed by Get Lit. The programs were placed in a gold colored bag that also consisted of a personalized paper fan and custom designed game. The winner of the game was announced during the reception. Guests also received a bag with a traditional incense stick holder and sweets. Music consisted of traditional South Indian nadhaswaram played by DJ Raj.

The reception was a grand affair. For cocktails, the Tuscany Terrace of the Ritz was chosen. Roman pillars and greenery characterized the place. It was personalized with things that emphasized the couple’s interests such as traveling. The couple arrived to the beats of dhol and made a sparkling entrance as the bridesmaids and groomsmen held sparklers on either side. While the dhol player entertained guests, the couple retreated to a private room for a toast.

The reception dinner was organized in the Plaza Ballroom of the Ritz. The room featured a rich royal look with elegant chandeliers, silk wall coverings and grand wall scones done in ivory and gold. The couple and the wedding party wore royal blue and emerald green clothing. The tables were alternately decorated with 20” panache vases holding hydrangea centerpieces lit up with base votives and lit gold elephants on fabric risers surrounded by a border of fresh flowers. The couple was seated in front of a white background embellished with white and gold jali columns. The sweetheart table had floating glass with fresh floral border lit up with floating candles in vases.

The couple first danced to U2’s“One” followed by a fast Latin salsa number, “Tamacun” by Rodrigo y Gabriela. The bridesmaids and groomsmen danced to a medley of Indian songs. All throughout the reception, the music was a mix of retro and modern numbers.

The couple says that people getting married should look around the venue to capture memorable images of family and friends. Such memories truly last forever.